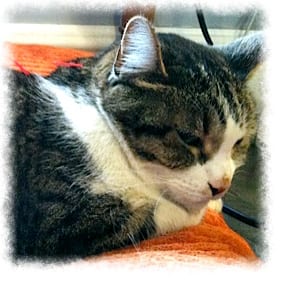 Frankie is a 13 year old cat who was born with cerebellar hypoplasia. This is a neurological disorder in which the part of his brain controlling balance and coordination is underdeveloped. There is no cure, but cats born this way can be healthy and happy, like a normal cat in every way except their coordination. Dina, Frankie’s owner, initially called to see if acupuncture could help stop Frankie’s recent habit of pulling out the hair over his lower back where he was reactive to being touched.

We were not certain why Frankie had started pulling his hair out, but common reasons can include allergies, parasites, pain, or emotional causes. Each of those causes was investigated and as no medical cause was found, we thought it might have been a reaction to some emotional events in his life (recent move to new house, dog died and new puppy joined the family). 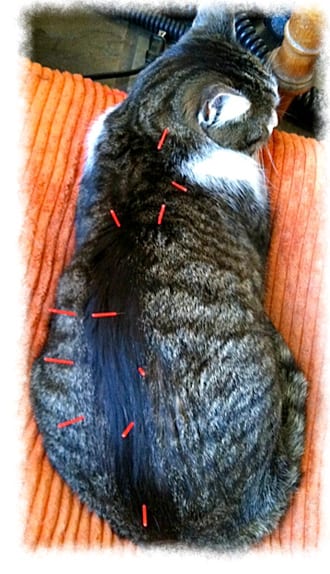 On physical exam I found Frankie had a few area of muscle tension with reduced spinal motion. That could have been a cause or consequence of the hair pulling, but regardless of cause, these symptoms needed to be treated to give Frankie some relief. Frankie enjoyed the chiropractic more than the acupuncture needles that day. But on future visits he became increasingly fond of acupuncture too.

I initially saw Frankie once a week for three treatments after which time his hair was growing back and he was less reactive to touch over that area. We then moved the appointments to every 3 months. We have found he can sometimes go for longer between appointments, but when there was a gap of 6 months at one point, Frankie started the hair pulling along this back again. So we have been faithful about doing it every 4 months for the past year and plan to keep this up as long as seems to be helping.

Cats with cerebellar hypoplasia are subject to musculoskeletal trauma throughout their lives. When they walk their steps are halting and uneven and they wobble a lot. We might move that way if we walked on a giant air mattress. Every step feels unstable. This makes spinal muscles work overtime to keep the body upright as the limbs never do quite what is expected! As you can imagine the body gets sore not just from the occasional fall but from the effort of trying not to fall. So having regular chiropractic and acupuncture treatment can help optimize function and comfort even though it cannot do anything directly for the neurological disorder.

Dina got Frankie when he was a kitten and describes him as very adventurous and also loves to cuddle. Hopefully with the ongoing great care Frankie gets at home and his maintenance treatments a few times a year he will have many more years to share life with Dina and her family.