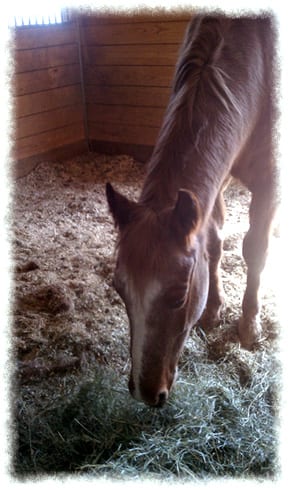 Rio was a 30 year old QH gelding who died on 3/29/12 after a long struggle with laminitis. LeeAnn was fortunate to have shared so many years with him. Kris (Rio’s farrier) and I were fortunate to have known Rio and been able to help him a little bit towards the end of his life. Rio was initially diagnosed with laminitis 5 years ago. I first met him in September 2011 after his disease was advanced long past the point of return to normal function. LeeAnn, Rio’s mom, contacted me to find out if acupuncture could help control his pain because the medication was not enough. At the first appointment Kris met me at the barn and she explained how she had been trimming him and we discussed the long term plan for his feet. Because of the pain, Rio had been having trouble holding his feet up for trimming. So after the physical exam I did a trigger point acupuncture treatment on Rio’s neck and shoulders to reduce some of the muscle tension. After this treatment he felt good enough to hold his feet up for Kris without complaint.

Rio received many acupuncture treatments, often weekly, over the course of 6 months. There was no way to reverse his laminitis but acupuncture was an important part of his pain control treatment plan that allowed him a good quality of life for his remaining 6 months.

Rio was a strong, gentle, wise and loving horse. He had been LeeAnn’s faithful companion for nearly 30 years. He displayed the same patient, stoic nature all his life even through bouts of severe pain. Those of us who love animals know we can love many over the course of our lifetime. But sometimes one gets into your heart like none other. Rio was one of those “once in a lifetime” horses.